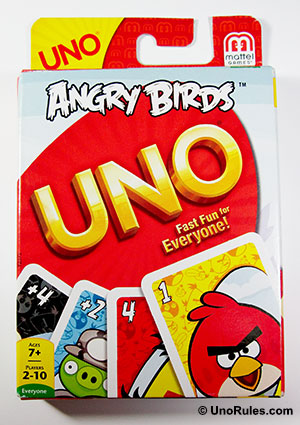 Uno Angry Birds is the special edition of Uno with Angry Birds as its theme. If you are a fan of Angry Birds (by Rovio Entertainment), this version of Uno should appeal to you. As always, the goal of the game is to discard all your cards before any of your opponents, and be the first to attain 500 points (or a pre-agreed number).

For Uno Angry Birds, the Action or Symbol cards are all the same except for its own unique Action card, called the King Pig Card. The functions of all the other Action cards are the same, and for them, please refer to the standard rules of Uno. As for the King Pig card, here is what it does:

2-10 players may take part in the game. Start first by choosing a dealer. The dealer can be chosen simply by everyone picking up a card from the deck and the person who picked the highest face number (Action cards are counted as zero) will be the dealer.

The dealer shuffles and gives each player 7 cards each. The remainder of the cards are placed face down to form the Draw Pile, and then the first card is turned up and taken out to form a separate Discard Pile.

The player on the dealer’s left begins play (in a clockwise direction) by matching a card in his/her hand with the top card in the Discard Pile, either by color, number, or symbol. The exception to this rule is the Wild card, which can be played at any turn, with or without any match.

If there is no matching card in hand or if you choose not to play any card in hand, the player needs to draw a card from the Draw Pile. This card can be played if it’s a match, otherwise, play moves on to the next person. Don’t forget that most important of Uno rules. When you are about to play your second last card (which will leave you with one card), you must announce “Uno" out loud. If you forget to do this and someone catches you before playing their turn, you must draw 2 cards as a penalty.

If you manage to play off your last card, you are the winner of the round, even if that card is a card that compels another player to draw even more cards. The round is then declared over, and points are counted from all the cards in your opponent’s hands as below:

The first player to achieve 500 points (or any other mutually agreed number) becomes the winner of the game.

The alternative way to win the game is to count all the points each player has at the end of each round, and when someone reaches 500 points, the person with the lowest score is declared the winner instead.