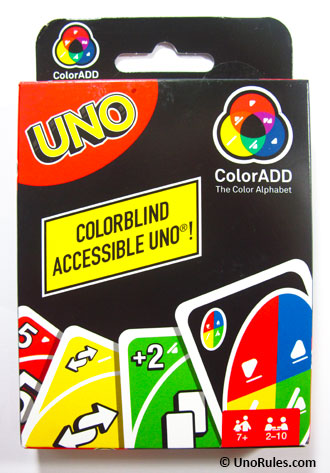 Uno ColorADD is a relatively new version of Uno that is color blind friendly. This version came out in 2017 and now makes it possible for people with color blindness to be able to enjoy Uno as well. It uses the ColorAdd color identification system that makes use of special symbols to represent different colors. So, someone who has color blindness is able to simply look at the symbol on the card and identify what color it is.

The objective of the game is still the same – Be the first player to discard all your cards, and if you are playing multiple rounds (to score the most points at the end of all the rounds).

The symbols for each of the four colors in Uno ColorADD are shown below. The four colors which we know so well, are Red/Blue/Yellow/Green. Mattel has included two reference cards that show not only the symbols for these four colors, but other colors as well (there are 9 colors in total; the other 5 will not be used in the game). ColorAdd symbols for green and blue, plus chart for other colors on the flip side of one of the reference cards. ColorAdd symbols for Red and Yellow, plus chart for other colors on the flip side of one of the reference cards.

The Action cards in Uno ColorADD are the same as in classic Uno.

Any number of players can play, from 2-10 players. Choose a dealer from among the players, perhaps by drawing a card each from the shuffled deck; the person who draws the highest number card becomes the dealer.

The dealer shuffles the cards and deals out 7 cards to each player, places the remainder face down on the table or center. This will be the Draw pile. The top card is turned over to form the Discard pile. Play begins with the person to the left of the dealer starting first.

Note: If that top/first card turns out to be an Action card, the unfortunate player to the dealer’s left should carry out whatever Action is required on that card. There is a positive in starting first though. If the first card is a Wild card, that first player can choose the color to begin play. If that card is a Wild Draw Four card, return it back to the Draw pile, shuffle it, and turn over a new card.

The players must match the card on the Discard pile either by color or number. If there is no available card to match, the player can put down a Wild card/Wild Draw 4 card to change the color (if he/she has one). Otherwise, the player needs to draw a new card from the Draw pile. That card can then be played if it matches the Discard pile card, otherwise play moves on to the next player in turn. Every player works to eventually discard all their cards, while trying to impede the other players (by getting them to draw new ones). When you are left with two cards, if it is your turn and you can play that penultimate card, you need to announce “Uno" out loud while putting that card down. If you don’t do that before the next player begins their turn, you could be penalized by other players who take notice, and you will need to draw 2 more cards from the Draw pile.

The game or round is won when a player successfully discards all his/her cards. Note: If the last card put down is an Action card, it still counts, and the next player must do what the Action card instructs. Normally, the first player to reach 500 points wins the entire game. Sometimes, if the game somehow keeps going on and on without a winner and the Draw pile has already been depleted, take the Discard pile, shuffle it, and turn it over to reform the Draw pile.

Points must be tallied at the end of each round, based on the score values for the cards as below:

Another way to play the game provided everyone is agreeable, is to keep a running tally of the points that every player has after the end of each round. When someone reaches 500 points, the player who has the least points is the winner.